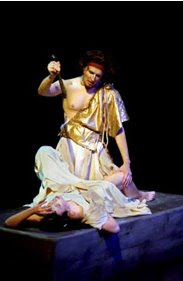 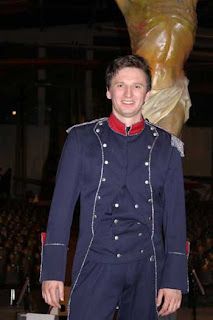 Our roster of Hot Poles continues with emerging barihunk Grzegorz Pazik. What caught our eye was the shot of his pec in the top photo. Pazik was performing Tarquinius in Britten's Rape of Lucretia at the Polish National Opera where he has been refining his craft.

Pazik graduated from the Fryderyk Chopin Academy of Music and went on to do well in numerous competitions. He made his North American debut as Guślarz in the Canadian premiere of Moniuszko's "Ghosts", conducted by Michael Newnham, at the Glenn Gould Studio in Toronto and in Hamilton.

We look forward to many more pictures of Pazik to add to our gallery of Kwiecien and Kitala.