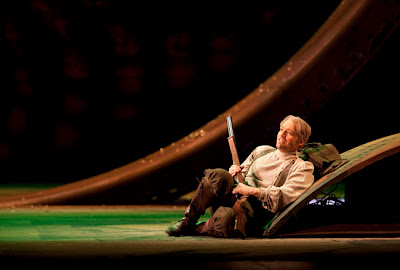 GavinDixon.info has an interview with barihunk Christopher Maltman talking about his role as the Gamekeeper in Janacek's "Cunning Little Vixen."

Christopher Maltman talks like he sings. His voice is rich and deep, his articulation clear, and the lilt of his tone imparts a musicality to every phrase. Opera is clearly in his blood.

We meet backstage at the Royal Opera House to discuss his latest role, the Forester in The Cunning Little Vixen. It’s his first Janáček and a typically adventurous foray into the less well-know corners of the 20th century repertoire. There are plenty of challenges here that you won’t find in Mozart. ‘It’s tough musically’ he tells me ‘one of those pieces that seems to exist on the edge of falling apart, but when it does come together it is great. We are just about there now, which is timely as the dress rehearsal is tomorrow.’ [Continued HERE]

You can watch the animated trailer for opera HERE. The production runs from March 22 through April 1 and tickets can be purchased HERE.