Barihunk Keith Phares just wrapped up a run as the title character in Elmer Gantry at the Florentine Opera in Milwaukee. Phares performed with his wife Patricia Risley, who played the role of the evengelist Sharon Falconer. Phares performed in the world premier at the Nashville Opera, which we also covered on Barihunks. Check out the link which includes a video. 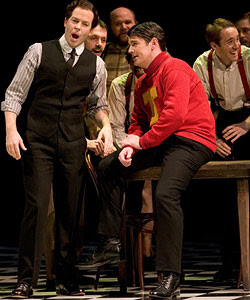 Reviews seems to indicate that the audience had a mixed reaction to the opera, but Naxos announced that they were recording the opera from the two performances. The opera mixes operatic style with traditional American gospel hymns. The recording project is being funded by the National Endowment for the Arts, the Aaron Copland Fund, Robert Aldridge and Herschel Garfien, and contributions of members of the Florentine Opera Board of Directors. We're pleased to see that American opera is being preserved for posterity.

Phares now heads to the Lyric Opera of Kansas City where he will perform the title role in Don Giovanni from April 24-May 2.