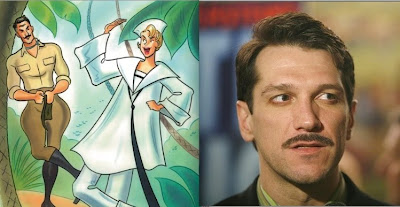 [ILLUSTRATION: MAURICE VELLEKOOP FOR THE NEW YORKER]
Set your recorders for Wednesday, August 18, 2010 when PBS will broadcast the highly acclaimed performance of South Pacific with Kelli O'Hara and barihunk Paolo Szot. Check your local PBS listing for times.

When this revival opened on April 3, 2008, Ben Brantley wrote in the New York Times, "I know we're not supposed to expect perfection in this imperfect world, but I'm darned if I can find one serious flaw in this production."

The production went on to win five Drama Desk Awards and 11 Tony nominations, winning in seven of the categories. Paolo Szot who has alternated between opera and Broadway has undeniably been the star of this show. As we mentioned in a previous post Szot will be performing in Don Giovanni in Dallas opening in October.

This is one man that you don't want to wash right out of your hair and it promises to be some enchanted evening.

Here is a video of O'Hara and Szot performing "Some Enchanted Evening" on The View.