Readers Weigh In On "Tallest Barihunk" 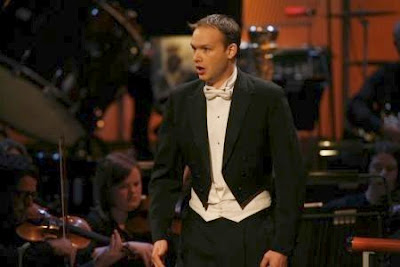 Our post about the tallest barihunk generated a lot of mail with people speculating about someone who might be taller than Olivier Laquerre. Some of the names sent to us were Thomas Hampson, Paul Whelan, Luca Dall'Amico, Kevin Thompson, Jérôme Varnier, Gregory Gerbrandt and Greer Grimsley. We're pretty confident that none of these singers are taller than Laquerre.

However, the most credible email we received asked about Dutch baritone Wiart Witholt. His website includes the following press tidbit:

Wiard Witholt from the Netherlands has the dubious honour of being the tallest competitor ever in Cardiff Singer. I have no idea how this is known, perhaps somewhere there is the equivalent of a police file kept on everyone, with a photo of each one holding up a number. Anyway Wiard is the tallest at 6' 7½" which I think is 2m, though it is late at night as I type this.

Email us at Barihunks@gmail.com
at 7:24 PM