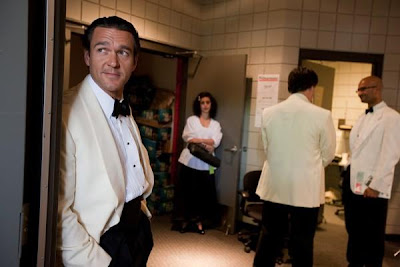 [Photo courtesy of NY Philharmonic]
Here's a great shot of barihunk Nathan Gunn waiting to go on stage with the New York Philharmonic.

If you want to see Nathan Gunn perform and you live in the U.S., you're in luck. He's performing on both coasts and in America's heartland.

On September 2, he'll join his wife Julie Gunn at the University of Illinois in performing selections from his CD "Just Before Sunrise." He then heads for San Jose, California to kick off the opening season of Symphony Silicon Valley on September 30th, where he'll perform Mahler's Songs of a Wayfarer. From November 9 through December 3 he'll be on the opposite coast performing Gugliemo in Così fan tutte at the Metropolitan Opera. He'll be joined by and all-star cast that includes Danielle de Niese, Miah Persson, Isabel Leonard, Pavol Breslik, and Wolfgang Holzmair, conducted by William Christie.

Email us at Barihunks@gmail.com
at 8:13 AM