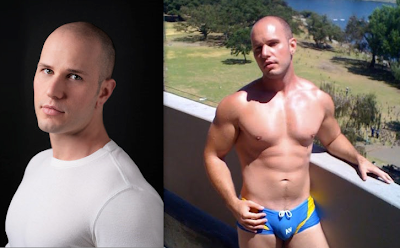 We ran a teaser back in March about Zachary Gordin's debut as Germont père in La Traviata with West Bay Opera. Fortunately, for anyone who wasn't able to be in California to see this bodybuilder/barihunk perform, we have video from the singer's YouTube site.

We also thought that it was important to run a few pictures of the former countertenor out of costume, since he's much hunkier before the makeup artists added 25 years to his muscular frame. It's also a good thing that the costume department didn't outfit him in something a little sexier, or we may have had the first Traviata where Violetta runs off to Paris with her lover's father.

EMAIL US AT barihunks@gmail.com
at 7:52 AM