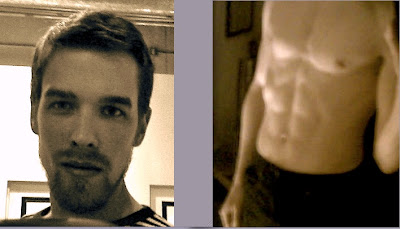 Check out the abs on Nicholas Nelson, who is singing the Bonze in Madame Butterfly at the Central City Opera.

Central City Opera has a long reputation for showcasing young talent long before they become superstars (i.e. - Denyce Graves, Mary Dunleavy and Lucas Meachem). However, the local press apparently isn't quite as skilled in their knowledge of opera. The Weekly Register-Call/ Gilpin County News referred to him portraying "the Bong," rather than the Bonze. Perhaps it's the local culture where people like Hunter S. Thompson and a few other drug loving celebrities lived.

The 28-year-old Minnesota native is also a part of the Portland Opera Studio where he'll be performing a recital with them on November 14, 2010. Next season he'll be covering Tonio in Pagliacci and Peter in Hansel and Gretel, as well as singing several roles in L'heure Espagnole and L'enfant et les Sortilèges.

EMAIL US AT barihunks@gmail.com
at 9:16 PM