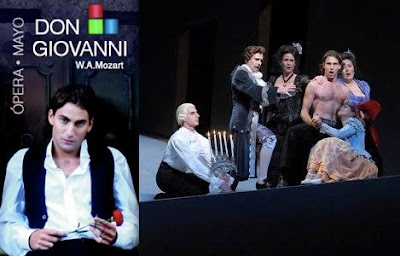 Radó clearly had the hometown audience on his side. He was born in Buenos Aires in 1986 and became the youngest member of the Colón Theatre choir and the Colón Theatre's Superior Arts Institute. After his success at Cardiff, he's been working primarily in Europe where he has sung Sparafucile in Rigoletto, the Bonze in Madama Butterfly and Raimondo in Lucia di Lammermoor and other smaller roles. His success as Don Giovanni will undoubtedly speed up his career path. From the reaction of the audience and local bloggers he has become and instant fan favorite. From the look of these pictures we can certainly see why.

Don Giovanni returns to Teatro Colón with barihunk Daniel Okulitch in the title role on July 20, 23 and 25. This will be Okulitch's debut as Don Giovanni.