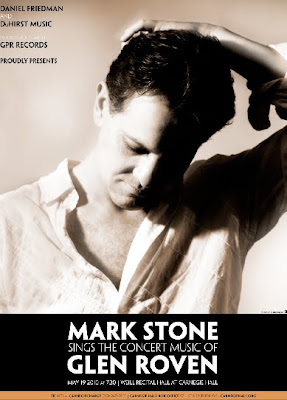 So we were thrilled to learn that the May 19 concert at Carnegie Hall singing the music of 4-time Emmy Award winning composer Glen Roven is almost completely sold out. We hear that there are only a handful of tickets, so click HERE to order.

One of the things that this site is dedicated to is keeping the operatic art forum fresh, exciting and current. We believe that opera needs to compete with television and the movies to survive. The works by our great living composers does much to foster that goal. Please keep us informed of any new works that haven't appeared on this site by sending an email to barihunks@gmail.com, especially if they include a barihunk!