We've been eagerly following the build up to the world premiere of "Before Night Falls" at the Ft. Worth Opera summer festival. Clearly, all eyes were on barihunk Wes Mason, the charismatic and talented young singer cast in the lead role. It's rare that a young singer with few major roles under his belt is tasked with such a demanding role at such an early stage of his career.

But credit General Director Darren Woods for having faith in Mason. In the videos we posted early one could see the enormous talent and growth of this young artist. From all accounts, Mason was a huge success. If conversations and emails that we've had with people in the opera world are any indication, we're going to be seeing a lot more of Wes Mason.

Here are some snippets from the first wave of reviews: 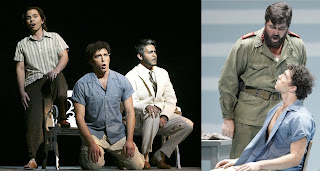 Wes Mason totally mastered an extraordinarily demanding role. Reinaldo Arenas, the central character, is on stage throughout the opera and sings in virtually every scene. This is a marathon for him, and he nailed it totally tonight. Blogger Leonard Link

Wes Mason rises to the challenge of portraying Arenas, although you cannot help but wonder at the wisdom of entrusting such a punishing role to a young singer. He has a remarkable fresh lyric baritone voice, which one hopes he will be able to keep. Gregory Sullivan Isaacs, Theater Jones