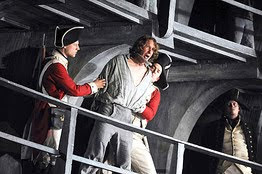 It looks like the American press wasn't quite as forgiving as the British press when it came to Michael Grandage's Billy Budd at Glyndebourne. Both the director and the Billy Budd - Jacques Ibrailo - talked openly before opening night about their desire to focus more on Billy's goodness than the sexual tension in the libretto. Howls erupted from some within the opera community, but the British press still gave the production polite if not favorable reviews. However, Paul Levy in the Wall Street Journal was pretty forthright in his criticism.

Mr. Grandage seems to have eliminated the homosexual theme from the piece. As Billy, who is so good-looking that he is nicknamed "Beauty," Jacques Imbrailo radiates goodness and innocence. Most productions rely on the dramatic tension created by the feelings both Captain Vere and the Master-at-Arms, Claggart, have for the handsome able seaman, Billy, who has been press-ganged from his passing merchant ship, Rights o' Man. Neither John Mark Ainsley's Vere nor Phillip Ens's Claggart seems to have any sexual desire for Billy. Though it feels deliberate, this could, of course, simply be a failing in their performances.

In any case, it exposes a real weakness in the work's first half, in which Billy, unjustly accused by Claggart of inciting mutiny, stammeringly fails to defend himself, and in frustration strikes him dead with a single blow. The only witness is the unfailingly just Captain Vere. As he wrote to literary critic Lionel Trilling, Forster was more interested in Vere's lapse from goodness than in Claggart's "natural depravity." The novelist thought he'd written Claggart's monologue along the lines of Iago's in Verdi's "Otello," but in the absence of the sexual chemistry that usually conceals the poverty of the text, Claggart's Act I aria is just a statement of an inexplicable hatred for Billy. Forster's words don't even support a Coleridgean analysis of Iago and Claggart's characters as pure, unmotivated evil.