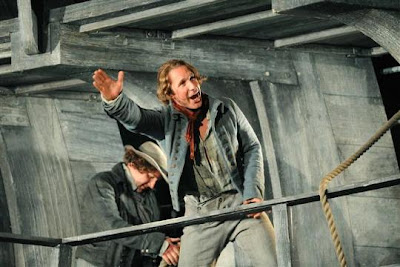 The reviews are in for Jacques Imbrailo's much anticipated Billy Budd at Glyndebourne and it appears to have been a critical success. One of the criticisms before opening night was that the director and Imbrailo might take out some of the eroticism that both Hermnan Melville wrote into the original story and composer Benjamin Britten wrote into the opera. Despite the overall glowing reviews, The Guardian touched on the issue in their review:

Jacques Imbrailo’s slight but refreshingly modest Budd likewise had to dig deep – and did - to surmount the limitations of his bantam-weight voice and ultimately achieve real pathos through the strength of his conviction.

The entire review is HERE. 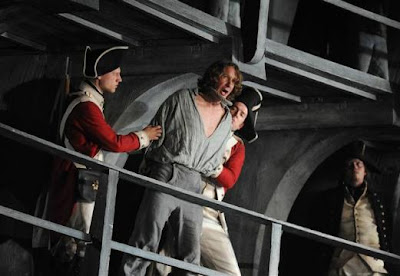 The Times of London wrote:

Jacques Imbrailo’s Billy, his fateful stammer intensified to epileptic proportions, has exactly the right mixture of puppyish naivety and physical prowess (his right hook would not disgrace Lennox Lewis), though in his superbly sung final soliloquy he tellingly hints that, beneath the jolly-Jack-Tar bravado, a terrified boy is trying desperately to hold it together.

The entire review is HERE.

Jacques Imbrailo's Billy is a total joy – slight, lithe and wonderfully guileless, singing his farewell to life with immense dignity and pathos. 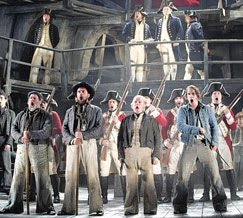 Jacques Imbrailo makes an important career step with his assumption of Billy. In imposing voice, he has the difficult task of presenting a character of natural goodness and entirely succeeds.

Imbrailo now heads to the Royal Opera House for performances of Le Nozze di Figaro and as Dr. Malatesta in Don Pasquale. He will be alternating nights as Count Almaviva with fellow barihunk Mariusz Kwiecien in Nozze. He will reprise the role of Billy Budd at the Netherlands Opera in March 2011. Early reports are that this Billy Budd will be the more radical interpretation that starred Peter Mattei in Frankfurt.