Four of our favorite barihunks will be appearing at the Opera Theater of St. Louis' summer festival. Daniel Okulitch, who is suddenly one of the most eagerly sought after baritones in opera, will be singing the Gene Wilder role of Willie Wonka in the new opera The Golden Ticket by Peter Ash. The New York Times ran a brief blurb on the opera in their Sunday edition. The opera will head to the Wexford Festival in October 2010 where Wayne Tigges will sing the lead role. 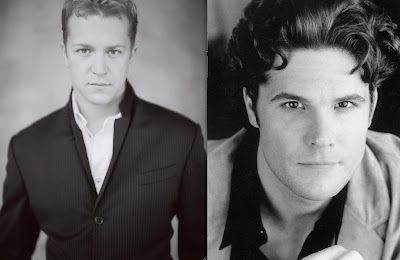 Appearing together in Sondheim's A Litte Night Music will be three of the sexiest young barihunks around. Chris Herbert will sing the role of Henrik Egerman, while Lee Gregory takes on the role of Carl-Magnus Malcolm. Topping off an already amazing cast will be the young barihunk Aaron Agulay as Mr. Lindquist and the famous actress Amy Irving as Desiree Armfeldt. An additional bonus will be that sets, costumes and stage direction will be by the legendary fashion designer Isaac Mizrahi. Here is a video with Mizrahi talking about his upcoming work at the innovative opera company.