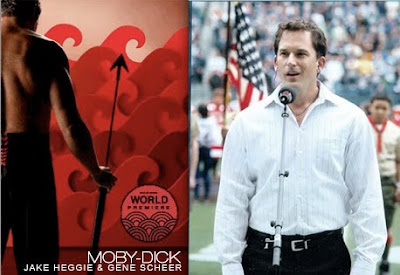 By all accounts Jake Heggie's new opera "Moby Dick" is a critical success. The opera is having its world premiere in Dallas right now and will come to the San Francisco Opera in 2012. Tenor Ben Heppner has been getting rave reviews as Captain Ahab, but critics have also been singling out barihunk Morgan Smith for his portrayal as Starbuck. The Wall Street Journal wrote, "Baritone Morgan Smith brought mellifluous lyricism and anguish to Starbuck's tuneful arias..."

"Ahab’s other foil is Starbuck, the first mate who keeps trying to reason with him, to no avail (each nearly murders the other). This was sung by Morgan Smith, a baritone with a strong mid-weight voice and acting ability whom I will be looking out for in future."

Although we don't have a clip of Morgan Smith from the opera, here he is singing Jake Heggie's "Golden Years":

Moby Dick runs through May 16 and you can visit the Dallas Opera website for more information.