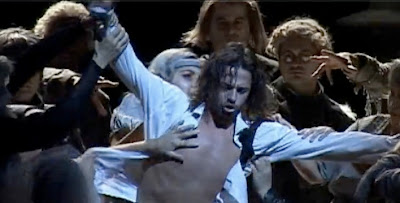 We're adding Markus Werba to our list of the world's sexiest Don Giovanni's, which includes Randal Turner, Mariusz Kwiecien, Simon Keenlyside, Martin Achrainer, Teddy Tahu Rhodes, Lucas Meachem, Matthew Worth, Nmon Ford and others. Werba is finally emerging as a major star in opera in Europe, America and Japan, where he is wildly popular.

The Austrian singer has also scored huge successes with two other Mozart roles, Papageno in Magic Flute and Guglielmo in Così fan tutte. He'll be returning to the role of Papageno next year in Vienna, where he joins fellow barihunk Günther Groissböck, who is singing Sarastro. On May 18th, he opens in Don Giovanni opposite barihunk Alex Esposito's Leporello at the stunning Teatro la Fenice. He returns to Lyon in March 2011 to reprise his success in Don Giovanni.

Make sure to watch the highlight trailer below from Lyon.