Bolduc To Appear As Belcore

We featured Christopher Bolduc over a year ago as a barihunk whose career was about to take off. We're thrilled to see that he's been cast as Belcore in Ft. Worth Opera's production of 'L'elisir d'amore" during their summer season. We're still bullish on Bolduc and predict great things for this young singer. It's great that Ft. Worth is willing to put young singers on stage in roles like Belcore, rather than always casting the same handful of singers.

Belcore isn't usually considered a barihunk role, although Mariusz Kwiecien sexed up the role in Amsterdam, as seen on this site. 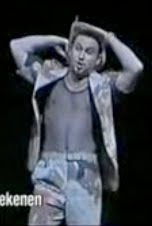 It looks like Ft. Forth is sticking with a more traditional performance than their Dutch counterparts, but we're still confident that Bolduc will look good and sound good. Here is a video of him from the Academy of Vocal Arts singing another non-barihunk role, Ford in Verdi's "Falstaff."